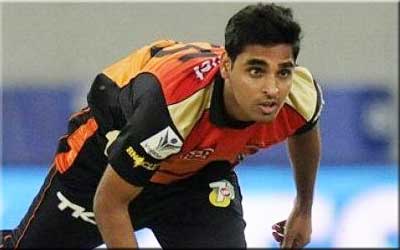 15th Match of IPLt20 2016 has been played between Gujarat Lions and Sunrisers Hyderabad at Saurashtra Cricket Association Stadium, Rajkot on 21st April 2016.Putting into bat first by Hyderabad, Gujarat Lions managed to put small total of 135 runs in 20 overs. Sunrisers with superb opening stand by DA Warner's 74* and S Dhawan's 53* chased the given target in 14.3 overs and won the match by 10 wickets, B Kumar picked up 4 wickets for Hyderabad and he declared man of the match.

Earlier, Sunrisers Hyderabad won the toss and elected to field. Gujarat Lions could not made batter start and lost inform batsman AJ Finch for a duck.Skipper SK Raina played good cricket and made 75 runs of 51 balls but, Gujarat ended with 135 runs in 20 overs.

Following small target of 136 runs. SRH opening bastmen played superb cricket and gave Hyderabad much needed win by huge margins of 10 wickets in 14.5 overs. DA Warner made 74* and S Dhawan made 53* runs for Hyderabad. B Kumar bowled well and picked up 4 wkts for Hyderabad and declared man of the match for his good bowling performances.

Player of the match - B Kumar (Sunrisers Hyderabad)