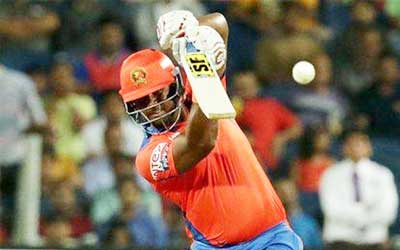 25th Match of IPLt20 2016 has been played between Rising Pune Supergiants and Gujarat Lions at MCA International Stadium, Pune on 29th April 2016. Putting into bat first by Gujarat Lions, Pune Supergiants with SPD Smith's superb 101 and AM Rahane's 53 runs put huge score of 195 runs in 20 overs. Gujarat in reply chased the given huge target on the last ball of the match and won the match by 3 wickets over Pune. DR Smith declared man of the match for his 63 runs from the top.

Earlier, Gujarat Lions won the toss and elected to field first and let Pune to set target. Pune put huge score of 195 runs in 20 overs with SPD Smith's maiden 100 knock. He made 101 runs in 54 balls with 8 fours and 5 massive sixes. AM Rahane also played good inning of 53 runs and anchor the inning from the top as well.

Following huge target of 195 runs, Gujarat made firing start with BB McCullum and DR Smith as well. Both played quick cricket and contributed well 43 and 63 runs from the top. SK Raina and KD Karthik also played sensible cricket in middle overs and contributed 34 and 33 runs. Match went to last balls and Gujarat registered comphehensive win by 3 wickets on the last ball of the match.