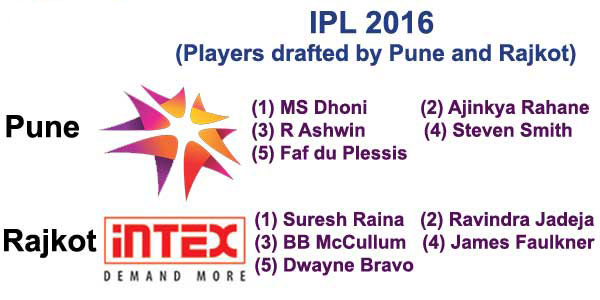 IPL player draft held in Mumbai. Player draft was necessary for two new teams for IPLs 2016 and 2017 to make up for the suspended Super Kings and Royals franchises. New Rising (Pune) and Intex (Rajkot) won ownership at the franchise auction earlier, and Pune having made the most successful bid got the first chance pick player in the draft today.

MS Dhoni was the first one to be picked by the Pune based franchise owned by Sanjiv Goenka. Suresh Raina and Ravindra Jadeja picked by Rajkot based franchise. Alongwith these 3 players other 7 players also drafted by Pune and Rajkot today. Here is the complete list of players who were the top picks in the player draft.

Total 7 players from Super Kings and 3 from Royals were chosen by Pune and Rajkot today. Unfortunately, Australia's allrounder Shane Watson missed out to picked by any franchise today. There were no fast bowlers chosen.

Both franchises will lose INR 39 crore from their auction purse, and will have INR 27 crore to spend at the auction in Bangalore to make up the rest of their squad. All the other Super Kings and Royals players not picked in the draft will not go into the main player auction in February.

These figures do not necessarily indicate the player's full salary. It is only the amount deducted from Pune and Rajkot's purse. All 10 men picked today will be paid the amount they were originally contracted for by the Super Kings or Royals.

Pune and Rajkot used up all of their allotment of five picks - seven players from Super Kings and three from Royals were chosen.