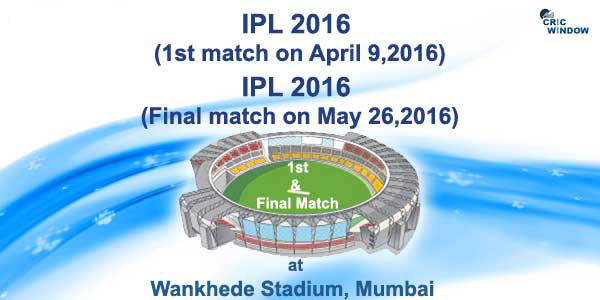 The biggest entertainment sports league, Indian Premier League's season 9 will start on April 9,2016 six days after the ICC World Twenty20 final in Kolkata, and end on May 26, 2016. Mumbai got an opportunity to host the 1st match of IPL season 9 and also the final encounter IPL 2016.

As Chennai and Rajasthan has been suspended for next coming 2 years, Pune and Rajkot franchises have included by lowest bidding prosess for IPL 2016 and 2017. Now Pune and Rajkot will joined with Mumbai, Bangalore, Punjab, Delhi, Kolkata and Hyderabad for IPL season 9 and IPL season 10.

According to BCCI president Shashank Manohar, the player auction will be held in Bangalore on February 6,2016. He also said the franchises will take part in a two-day workshop in Srinagar, on January 13 and 14.

Two new franchises Pune and Rajkot will take part in a player draft on December 15, where both teams will pick five players each from a pool of Chennai Super Kings and Rajasthan Royals players. Having finished as the lowest bidder, New Rising will get to pick the first player from the 10-player pool. Intex will pick the second player and both teams will alternate thereafter.

Before auction, other six franchises will allowed to retain five players. The 1st player gets Rs 12.5 crore, the 2nd Rs 9.5 crore, the 3rd Rs 7.5 crore, the 4th Rs 5.5 crore and the 5th Rs 4 crore. An uncapped player stands to earn Rs 4 crore if he is picked. Irrespective of the IPL fee agreed between the franchise and the retained player, a fixed amount will be deducted from the franchise's salary cap per player retained.