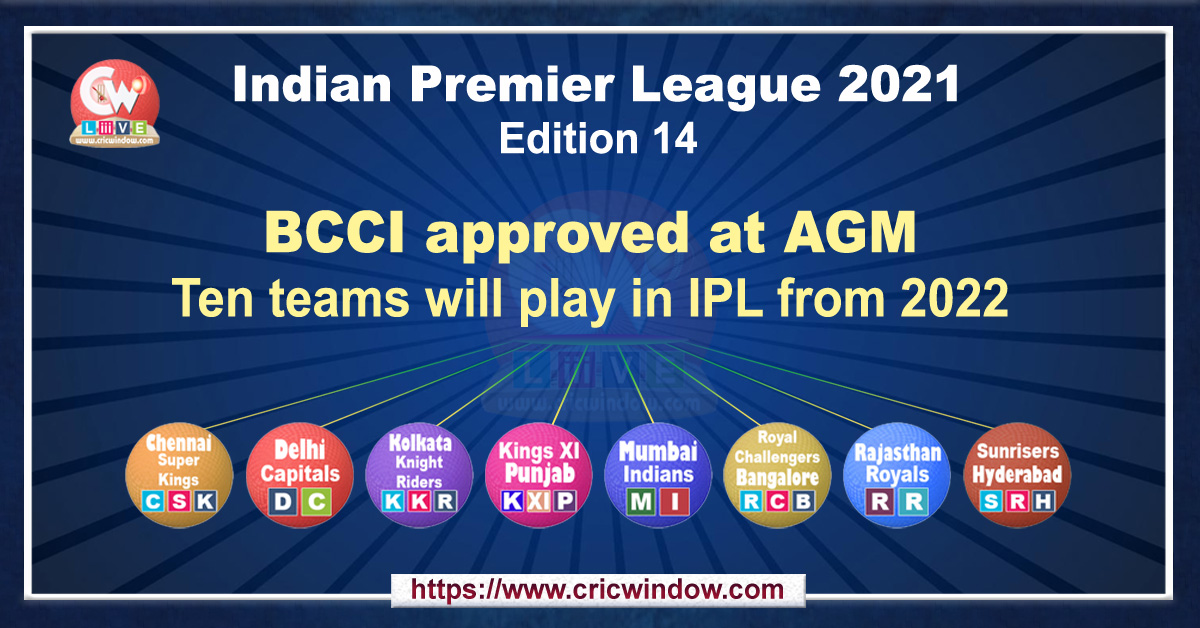 At the Annual General Meeting held on 24th December, 2020 at Ahmedabad, BCCI approves 10-team IPL from edition 2022. The board members in AGM has decided that the IPL can comprise up to 10 teams from the 2022 edition and authorised the IPL governing council to finalise the preparations for the addition of the new teams. That means the 2022 IPL could have nine or 10 teams.

Earlier, In the year 2011, 10-teams participated in IPL where two new teams : Kerala based - Kochi Tuskers Kerala and Pune based - Pune Warriors India were introduced. Kerala based - Kochi Tuskers Kerala played for one season in 2011 only. But, Pune based - Pune Warriors India participated for next two years 2012 & 2013 respectively. So, 2012 and 2013 has 9-teams in IPL.

The board also decided that, the new IPL team(s) would be located in a state where no existing franchise has a home base. That means, Maharashtra, Tamil Nadu, Karnataka, Telangana, West Bengal, Rajasthan, and the union territories of Delhi and Chandigarh has been ruled out for new franchise. More over, other international match venues like Ahmedabad, Rajkot, Visakhapatnam, Kochi/Thiruvananthapuram and Lucknow, would be favourites to host the new franchises as well.

For the time being, with less than four months left for the next IPL edition, it was decided to stick to eight teams for the 2021 edition. IPL can comprise up to 10 teams from the 2022 edition.