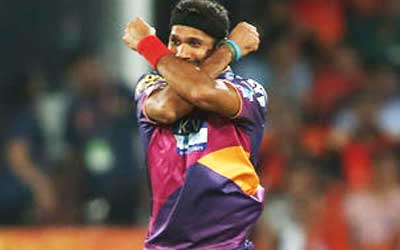 49th Match of IPLt20 2016 has been played between Rising Pune Supergiants v/s Delhi Daredevils at MCA International Stadium, Pune on 17th May 2016. Putting into bat first by Pune, Delhi's most batsmen failed to bat well and managed to put small total of 121 runs in 20 overs. AB Dinda and A Zampa picked up 3 wickets each for Pune. Rain stopped the match in second half and Pne declared winner by 19 runs (D/L) & Dinda got match of the match for 3 wkts.

Earlier, Rising Pune Supergiants won the toss and elected to field. Delhi's opening batsmen faild to stood in middle for long and lost wickets to AB Dinda early. KK Nair came in middle and played good inning for Delhi contributing 41 runs before left the field. Other top and middle orders could not bat well and lost wickets without scoring much for Delhi. In last over CH Morris smashed 2 sixes and 2 fours with 38 runs in 20 balls and managed to put respactable score of 121 runs in 20 overs.