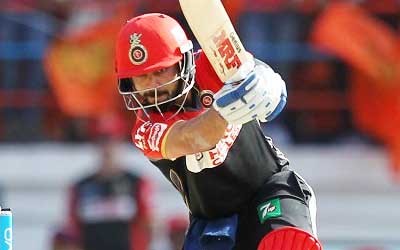 50th Match of IPLt20 2016 has been played between Royal Challengers Bangalore v/s Kings XI Punjab at M Chinnaswamy Stadium, Bengaluru on 18th May 2016. Putting into bat first by Punjab, Bangalore in a rain disturb match managed to put huge score of 211 runs in 15 overs. V Kohli and CH Gayle played stroming inning of 113 of 50 balls and 73 of 32 balls respectively. Punjab in reply managed to score 120 runs in 14 overs and lost the match by 82 runs (D/L). Un-doubtly Virat Kohli declared man of the match for his superb 100 ton with 113 runs.

Earlier, MAtch delayed by rain and cut to 15 overs per side. Punjab won the toss and opeted to bowl first. The decision not gone in favor of Punjab and Bangalore got good firing start with CH Gayle and Virat Kohli as well. Both go after Punjab bowlers rudely and played many lofted shots all around the ground. CH Gayle made quick 73 runs of 32 alls with 4 fours and 8 massive sixes. V Kohli took the charge in hand and played once again extra ordinery inning for Bangalore. He smashed 113 runs just in 50 balls with 12 fantastic fours and 8 towering sixes in his splendid inning. Bangalore put huge score of 211 runs in 15 overs.

Following ver huge target of 212 runs in 15 overs, Punjab managed to score 120 runs in 14 overs and lost the match by huge margins of 82 runs. YS Chahal picked up 4 wickets for Bangalore.