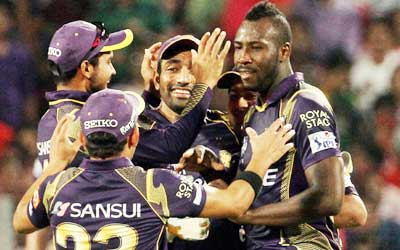 32nd Match of IPLt20 2016 has been played between Kolkata Knight Riders and Kings XI Punjab at Eden Gardens Stadium, Kolata on 4th May 2016. Putting into bat first by Punjab, Kolkata with top orders good batting managed to put 164 runs on board in 20 overs. Punjab in reply managedto score 157 runs and lost the match by 7 runs. AD russell bowled well and picket up 4 wickets of 20 runs and he declaed man of the match.

Earlier, Kings XI Punjab won the toss and elected to field fisrt. Kolkata as usual made good confident start with skipper G Gambhir and RV Uthappa as well .Both played well and contributed 54 and 70 runs before unfortunately got run out. In later overs middle orders could not kept the momentum on and KKR managed to score 164 runs at the end of 20 overs.

Following target of 164 runs, Punjab could not made good start and lost top 3 wickets just in 13 runs. WP Saha and GJ Maxwell came in middle and took the charge in hand for Punjab. WP Saha got out scoring 24 runs but, GJ Maxwell played good inning of 68 runs of just 42 balls before lost his wicket. In later overs AR Patel played quick inning of 21 runs of just 7 balls but not enough to save the match and KXIP lost the match by 7 runs at Kolkata.