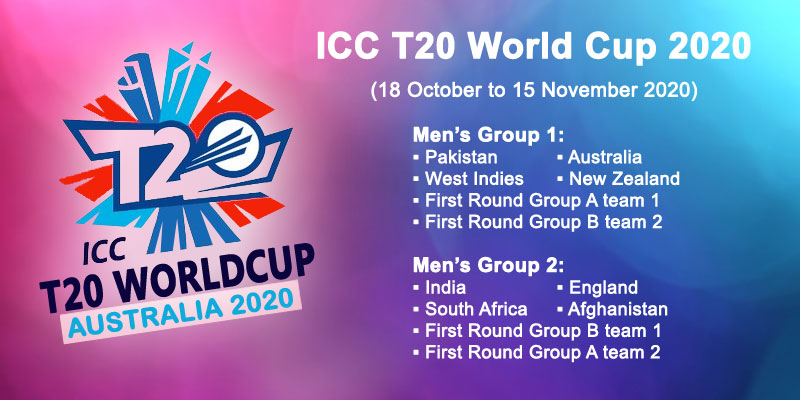 The most awaiting tournament, ICC WorldT20 2020 to be played from October 18 to November 15, 2020. The International Cricket Council (ICC) announced the groups and schedule of the ICC World Twenty20 Australia 2020. Seven world-class venues in seven Australian Host Cities will host 45 matches. Hosts Australia will play the 1st match of the Super 12 stage of the tournament on Saturday 24 Oct, 2020 at the Sydney Cricket Ground against the world’s top-t20i ranked team, Pakistan. India will play with South Africa same day at Perth Stadium.

Total 45 matches, will be played in the 29-days tournament including 12 Qualifier First round matches, 30 Super-12 stage matches, 2 semifinals and 1 grand finale match. Sydney and Adelaide to host semi-finals while Melbourne to host final match.

We have witnessed five winners in six times. India, Pakistan, England and Sri Lanka have won icc worldt20 trophy once while West Indies won twice in 2012 and 2016 as well.

According to the tournament format, eight teams in two groups of four, will feature in the first round matches with the group winners joining eight teams in the Super 12 stage. The top two teams from both the Super 12 Groups will then qualify for the semi-finals. Winner of Semi-finals will play for ICC Worldt20 title 2020.