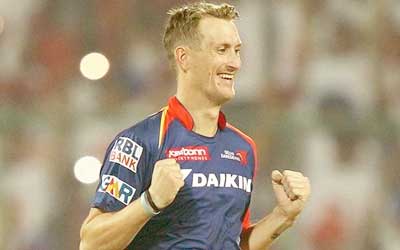 42nd Match of IPLt20 2016 has been played between Sunrisers Hyderabad and Delhi Daredevils at Rajiv Gandhi International Cricket Stadium, Hyderabad on 12th May 2016. Putting into bat first by Delhi, Hyderabad managed to put 146 runs in 20 overs. DA Warner played well and made 46 runs for SRH from the top. Delhi with decent batting performances chased the given traget in 18.1 overs and won the match by 7 wkts. CH Morris declared man of the match for his tight bowling spell with 1 for 19 in 4 overs.

Earlier, Delhi Daredevils won the toss and elected to field. Hyderabad got good start with skipper DA Warner and S Dhawan initially. Both played good cricket and added 67 runs for 1st wicket before Warner got out scoring quick 46 runs of 30 balls. S dhawan also played good inning of 34 runs before left the field. Other middle and lower batsmen could not stood in middle for long and lost wickets in regular interwals. At last Hyderabad managed to put average total of 146 runs in 20 overs.