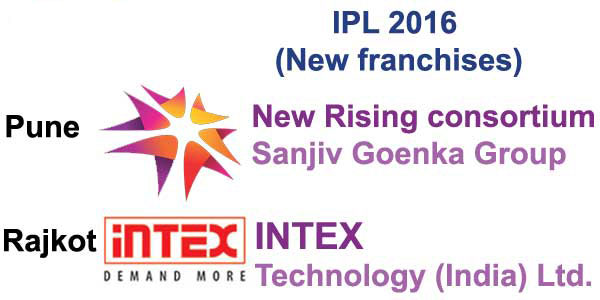 As announced by IPL Governing Council, lowest bidding investors will get an opportunity to select for new IPL teams for next coming 2 year. New Rising consortium owned by Sanjeev Goenka and mobile phone manufacturer Intex have won ownership rights of the two new franchises in the IPL. New Rising have picked Pune as their home base, while Intex have opted for Rajkot.

New Rising bid Rs. minus (-)16 crore while Intex quoted minus (-)10 crore in the reverse bidding process through which the new franchises were chosen.

IPL chairman Rajiv Shukla said "A total of five bidders had entered the fray to bid for the ownership rights of the two new franchises that would replace Chennai Super Kings and Rajasthan Royals, who were both suspended for two years by the RM Lodha panel investigation the 2013 IPL corruption scandal. Harsh Goenka's RPG group, Chennai-based cement major Chettinad Group and Axis Chemicals were the other three bidders."

BCCI would pay a maximum of Rs 40 crore from its central revenue pool to the new owner Pune and Rajkot. New Rising will now pay Rs 16 crore while Intex will pay Rs 10 crore to the BCCI per year of their contracts.

The next step for both new franchises will be taking part in a player draft on December 15, where both teams will pick five players each from a pool of Chennai Super Kings and Rajasthan Royals players. Having finished as the lowest bidder, New Rising will get to pick the first player from the 10-player pool. Intex will pick the second player and both teams will alternate thereafter.

For the ten players chosen, the BCCI has applied the same money brackets it put in place two years ago when the other six franchises were allowed to retain five players. The first player gets Rs 12.5 crore, the second Rs 9.5 crore, the third Rs 7.5 crore, the fourth Rs 5.5 crore and the fifth Rs 4 crore. An uncapped player stands to earn Rs 4 crore if he is picked. Irrespective of the IPL fee agreed between the franchise and the retained player, a fixed amount will be deducted from the franchise's salary cap per player retained.