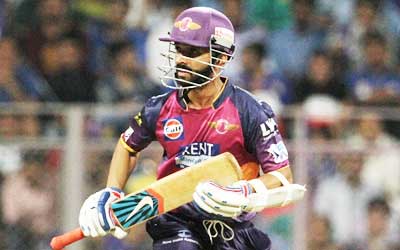 33rd Match of IPLt20 2016 has been played between Delhi Daredevils vs Rising Pune Supergiants at Ferozeshah Kotla Stadium Delhi on 5th May 2016. Putting into bat first by Pune, Delhi managed to put 162 runs in 20 overs. Pune chased given target in 19.1 overs with AM Rahane's 63* runs and won by 7 wickets. AM Rahane declared man of the match for his leading from top and contributed 63* runs.

Pune chased the given target in 19.1 overs with AM Rahane's superb batting perfomance with 63* runs and won the match by huge margins of 7 wickets. AM Rahane smashed 5th 50s of the series and he declared man of the match today.

Man of the Match : AM Rahane (Rising Pune Supergiants)