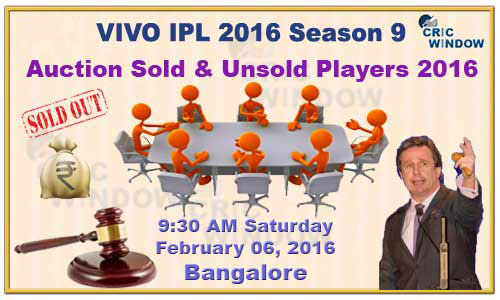 IPL 9 players auction scheduled on February 6, 2016 in Bangalore featuring 714 Indian and Overseas Players. Till now total 61 players were released by the six IPL franchises when the first trading window closed on December 31.
Yuvraj Singh of Delhi and Dinesh Karthik of Bangalore were most expensive players of previous year auction were released and will be auctioned once again this year. IPL new franchises Rising Pune Super Giants (RPSG) and the yet to be named Rajkot team have drafted 5 players till now and will looking for another best players to buy for perfact team combination. Other IPL established teams also participate to buy more effective players to make-up their best squad for IPL season 9.