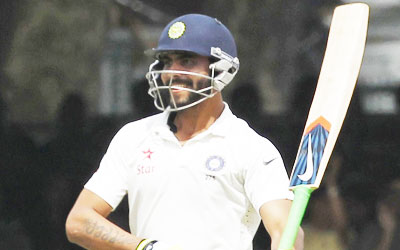 India resumed 4th day play with 19/0 and made required more 87 runs before lunch having lost 2 wickets and won the match by huge margins of 8 wickets. India won the series 2-1 and registered 4th series win in the season as well. India holds the No.1 Team ranking in Test ranking as well. KL Rahul made 51* runs and AM Rahane played quick inning of 38* runs in 27 balles to mades easy win over Australia. RA Jadeja declared man of the match for his all round performances with 63 runs and picked up 4 wickets in the match.

India resumed 3rd day play with 248/6.in the morning and managede to score 332 runs with RA Jadeja and WP Saha's sensible batting. Jadeja once again go past his fifty and contributed useful 63 runs of 95 balls. WP Saha also did well with his important 31 runs. India got 32 runs lead over Australia in 1st inning. Australia came into bat in 2nd inning and all out scoring just 137 runs in 53.4 overs. Only GJ Maxwell played good inning of 45 runs for Australia. Other batsmen knees down against India's quality bowlong. UT Yadav, R Ashwin and RA Jadeja bowled excellent spells and picked up three wickets each. India got 106 runs to win the match and 4-match test series as well.

India got 6 overs to play this evening and were 19/0 at stumps day 3. India needs 87 more runs to win the match and 4-match test series as well with 10 wickets remaining.

India resumed 2nd day play with 0/0.in the morning and lost M Vijay early scoring just 11 runs. CA Pujara joined with KL Rahul and played good cricket in middle. Both smashed fifties but got out scoring 57 and 60 runs respectively. AM Rahane took the charge in hand but left the field scoring 46 runs. Nathan Lyon trouble middle orders well and got four Indian batsmen wickets with impressive bowling today. India were 248/6 at stumps day 2 and still trailed by 52 runs of Australian 1st inning 300 runs.

4th and final decider test match of 4-match series between India and Australia has been started today at Dharamsala. Australia won the toss and decided to bat first. India played without skipper Kohli due to shoulder injury and included Kuldeep Yadav as 3rd regular spinner along with R Ashwin and RA Jadeja. Pace bowler B Kumar also got an opportunity to replace Ishant Sharma as well. After winning toss Australia lost MT Renshaw on team score 10 runs. SPD Smith joined with DA Warner and played superb cricket upto lunch time.

After lunch Warner got out scoring well 56 runs and became 1st victim of debut man Kuldeep Yadav. Kuldeep did not stop there and he took more three wickets in quick interwals and put Australia in deep trouble. SPD Smith with consistent batting completed his 3rd hunderd of the tour and keep one end safe. He got out scoring 111 of R Ashwin. Except MS Wade's 57 other lower orders failed to stood in middle for lond and Australia all out scoring 300 runs just before 15 minutes of day play. India got 1 over to play and were 0/0 at stumps day-1.