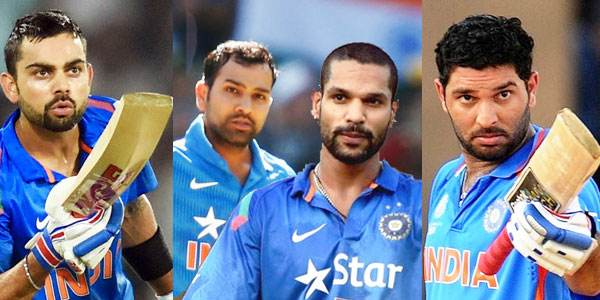 4th match of ICC Champions Trophy 2017 will be played between India and Pakistan of Group B on Sunday, June 04, 2017 at Edgbaston, Birmingham. Putting into bat first by Pakistan, India with top orders quality bating performances managed to put huge total of 319/3 runs in 48 overs. Rohit, Dhawan, Virat and Yuvraj smashed fifties for India to put huge score. Pakistan in reply managed to score 164 runs in 33.4 overs and lost the match by 124 runs (D/L mathod). Yuvraj Singh daclared man of the match for his quick 53 runs of just 32 balls.

Biggest fight in world cricket between India and Pakistan has been played at Birmingham in ICC Champions Trophy 2017. Pakistan won the toss and opted to bowl first and let India to set target. Putting into bat first by Pakistan, India made slow but sensible start with RG Sharma and Shikhar Dhawan initially. Both played good cricket in starting overs and put India on 46 runs in 9.5 overs before rain stopped the match. After little interruption match started and Indian openers continued to play superb cricket in middle. Both added 136 runs in 24.3 overs before S Dhawan got out scoring well 68 runs of 65 balls. Skipper Virat Kohli joined with RG Sharma and took the charge in hand for India. Rain once again started and started again after few minutes and match cut to 48 overs per side. Rohit and Kolhi were excellent in middle but, RG Sharma unfortunately got out in 90s and contributed well 91 runs in his superb inning. Yuvraj Singh came in middle to kept momentum on for India. He played super quick inning of 53 runs of just 32 balls before left the field. Virat Kohli at other hand played superb inning of 81 runs of 68 balls and put India on huge totals of 319 runs in 48 overs. HH Pandya in later overs played cameo of 19 runs just in 4 balls with three massive sixes helps India to put 300 plus total.

Pakistan needed 324 runs to win in 48 overs (D/L) before their inning started but rain once again delayed the match and Pakistan given 289 runs target to get in 41 overs. Pakistan got slow start with Azhar Ali and Ahmed Shehzad initially. Both added 47 runs in 9 overs before Shehzad lost his wicket scoring 12 runs. Next man Babar Azam also followed him of just 8 runs. Azar Ali played well and completed his fifty in 65 balls but got out scoring 50 runs. Mhd Hafeez and Shoaib Malik came in middle to take charge in hand for Pakistan. Mhd Hafeez made 33 runs and Shoaib Malik got run out contributing 15 runs. Skipper Sarfraz Ahmed could not stood in middle for long and left the field scoring 15 runs. Pakistan were 151/7 in 30th over and were in trouble in huge run chase. Other tail enders surrenderd against HH Pandya and UT Yadav and Pakistan team all out scoring 164 runs in 33.4 overs and lost the match by 124 runs (D/L mathod).